My Thai cat Yinefra Benji (or Yini for short) passed away at the age of 22, due to renal failure.

Before she came to live with us, I was catsitting her a few times and immediately came to like her calm but affectionate personality. After food had been prepared by me and enjoyed by her, we would sit on the sofa together: I would read, or doze a bit, and she would sit next to me, unobtrusively, just being there. This is her when I first met her, at age 15:

She came into my home shortly afterwards because her previous owner was looking to set her up with someone with less business trip duties.

When it was decided that she would move in with me, she accepted the situation with good grace and continued to be a gentle companion. She would always come to the front door to greet me when I came home.

We installed her favourite radiator hammock 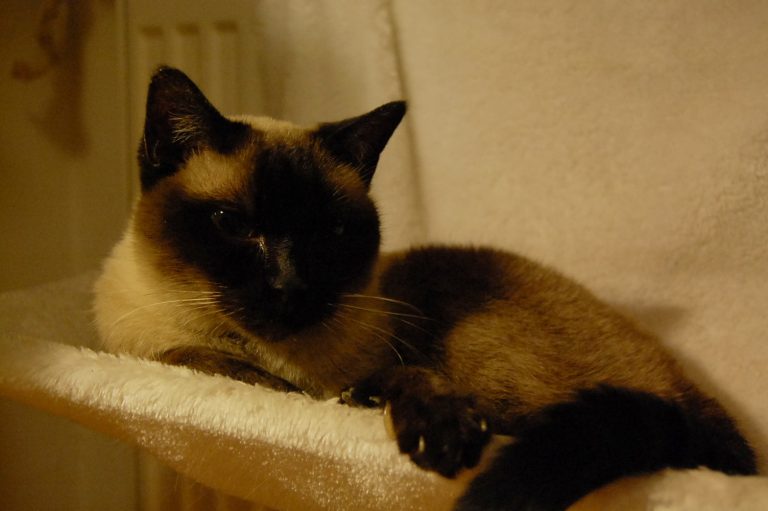 but she also loved to sleep on top of the radiator 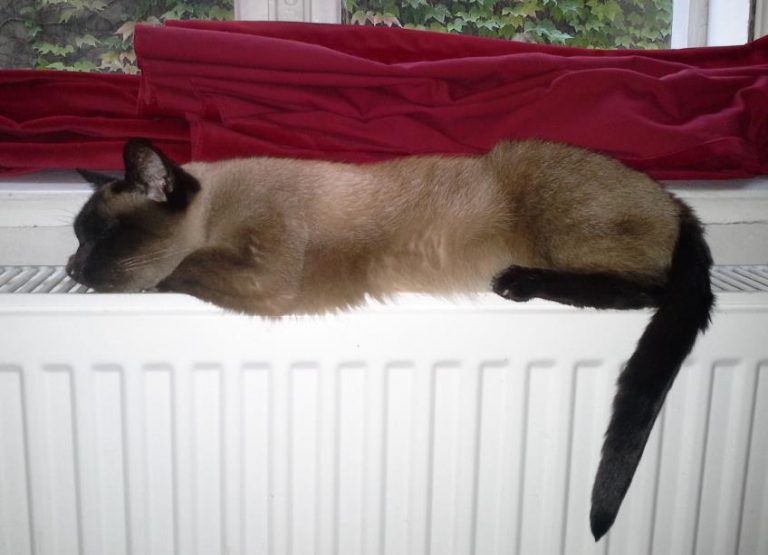 … or on the buttwarming device if it got really cold in winter. 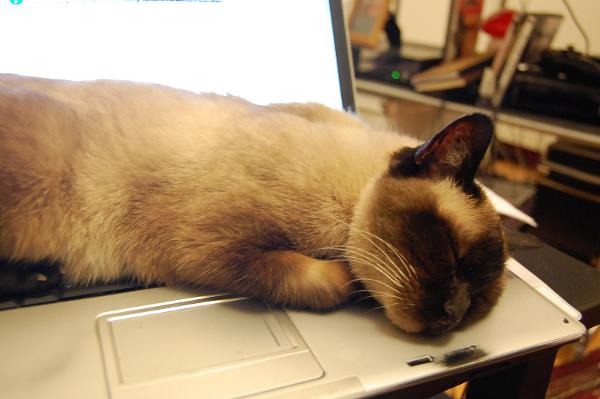 She was playful despite her age 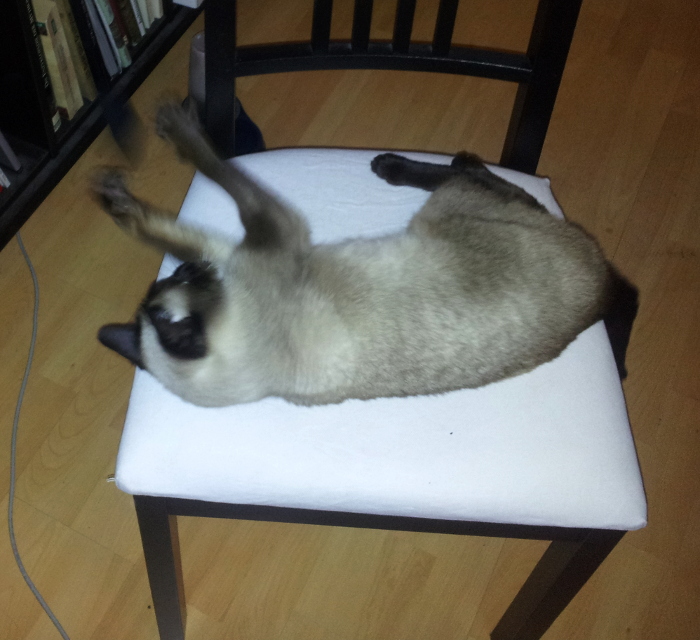 and graceful in her movements. More than one guest remarked about her “model” strut – paws criss-crossing when she walked.

Once at night she got stuck in between the myriad of knickknacks on top of my chest of drawers and did not dare to move anymore lest she’d knock something over. She remained motionless for 10 minutes until I took pity and rescued her.

She loved to complain about the birds in the hedge next to the window, making a sound I can best describe as soft bleating. 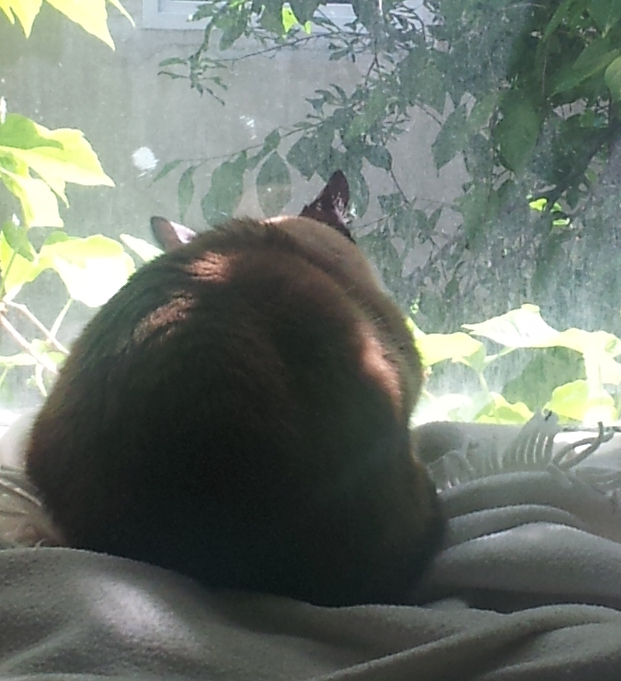 Apart from those short intervals of showing instinct, she raised her voice very rarely, mostly when she was exceptionally hungry and encouraged by us.

She was diagnosed with hyperthyroidism when she was 16, but enjoyed a good life for a long time afterwards thanks to infusions and a thyroid ointment applied daily to the exposed skin inside the ear (a process she did not mind at all).

In general she was very well behaved and did not make a fuss at four a.m. to get fed. Instead she silently wandered around the flat, only sometimes choosing a path directly over my face.

She was very companionable, liked to follow me around and sit next to me, even when I showered and water drops got on her body. You could also call her to come and sit with you, like a dog. Many hours were spent on the sofa together, reading or playing videogames.

The outdoors were not her element – she escaped through an open front door once. After a frantic search I found her sitting in the staircase, looking confused and annoyed. 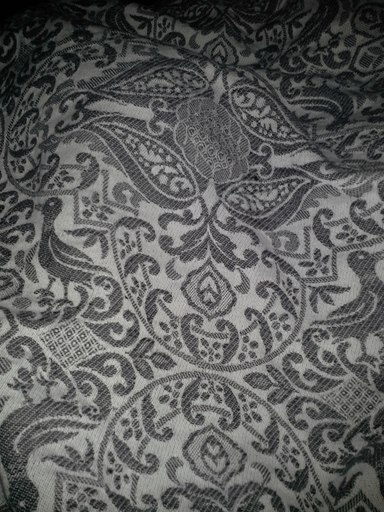 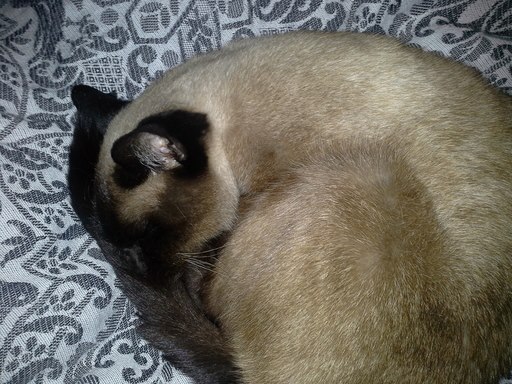 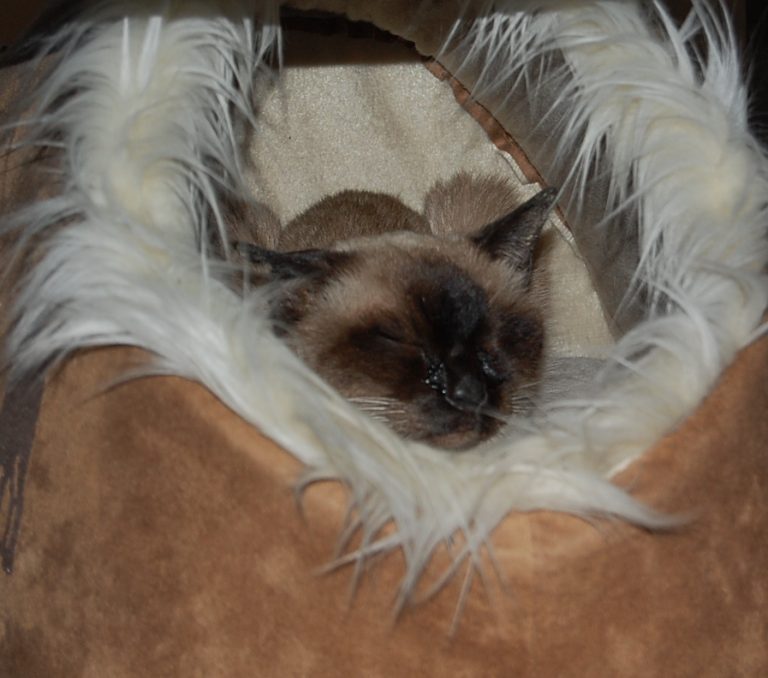 One of her favourite things to have was a human arm to hug, like a cat glove, and have her belly tickled. 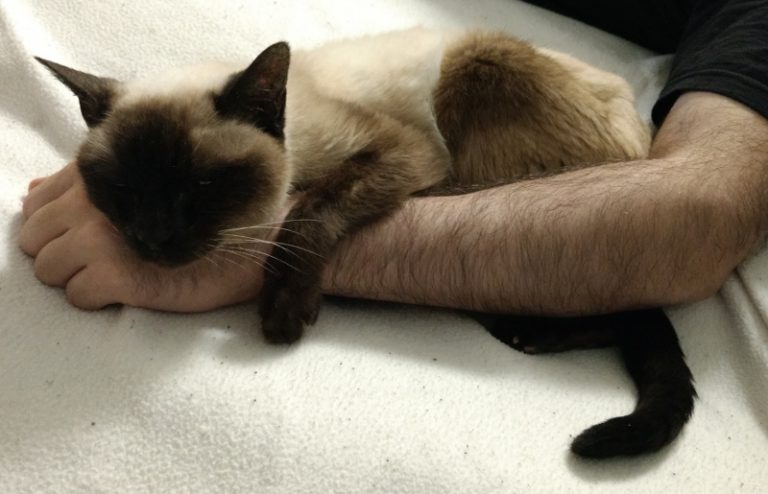 Sometimes she would start washing your arm to reciprocate the favour.

And if you found the secret tickling spot, she would start to clean her face – for reasons unknown, but it was a dependable reflex. 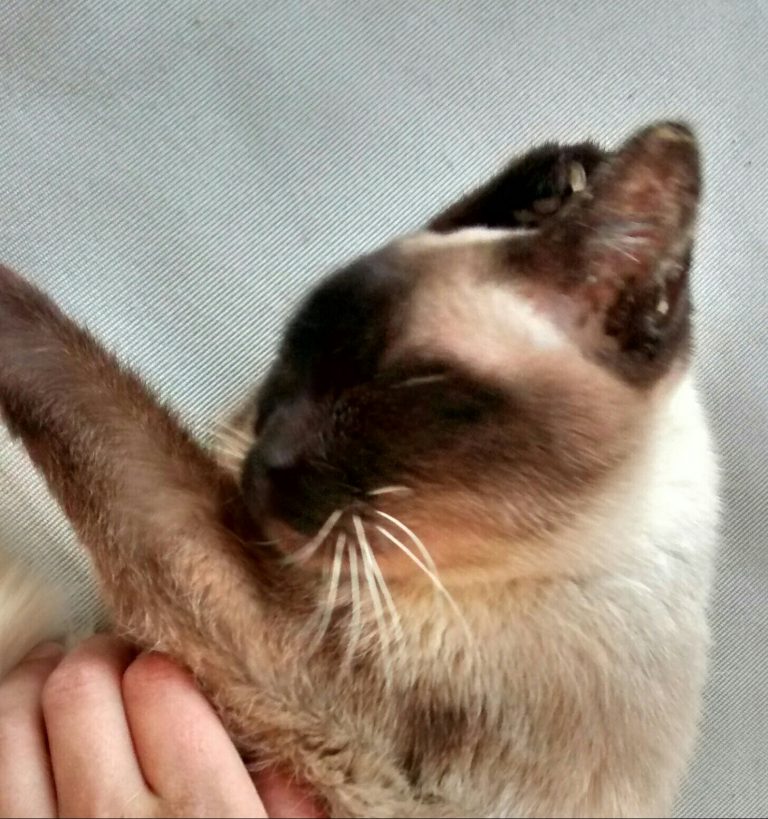 She also loved to sleep next to, or even better, on us. Monorail cat mode 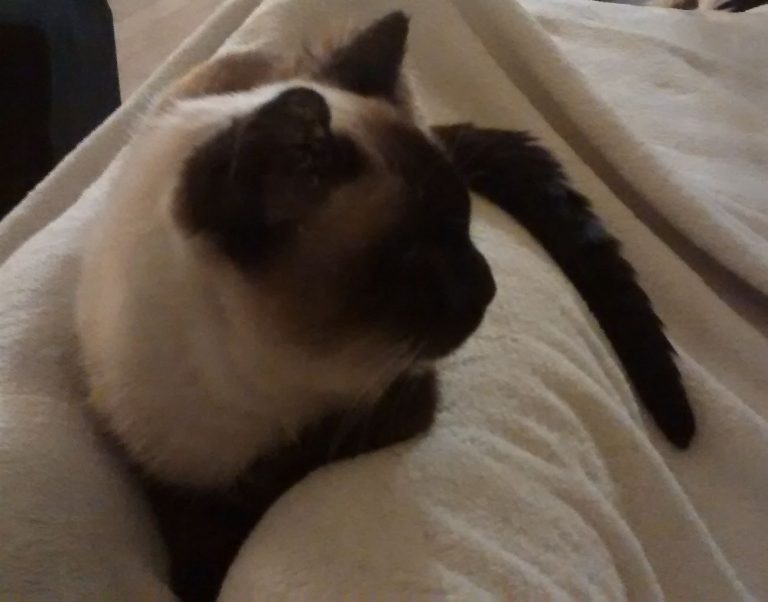 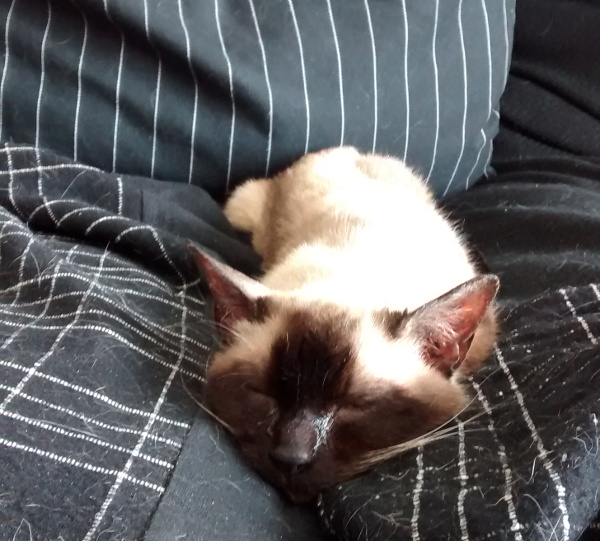 with a bonus of tiny twitching paws when she was dreaming.

Her specialty were acrobatic cat yoga positions: the jellybean 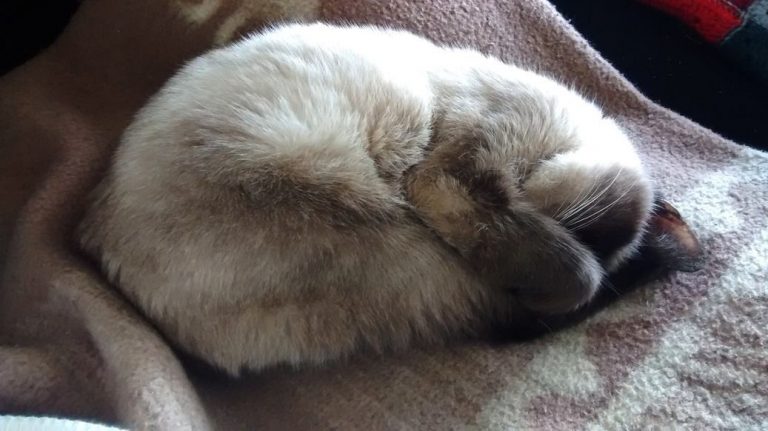 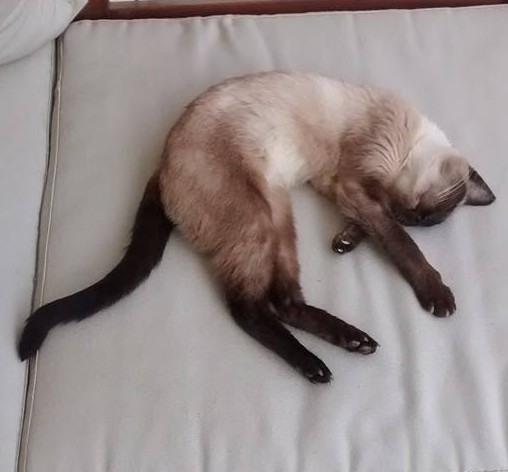 and the dramatic facepalm 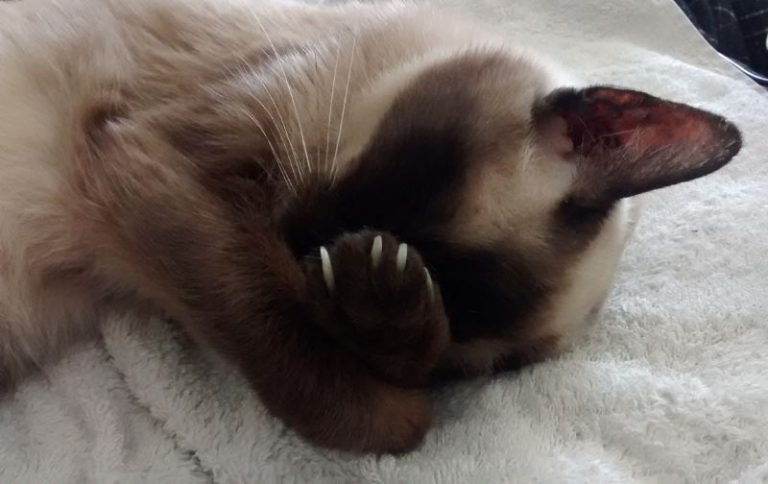 A very weird habit of hers was to vigorously push her eye into my fingernail – she managed to never get it poked out however.

When I moved to a bigger flat, she was confused at first about all the surplus space around her and decided to live on a carpet as a well-defined area for the first few days. 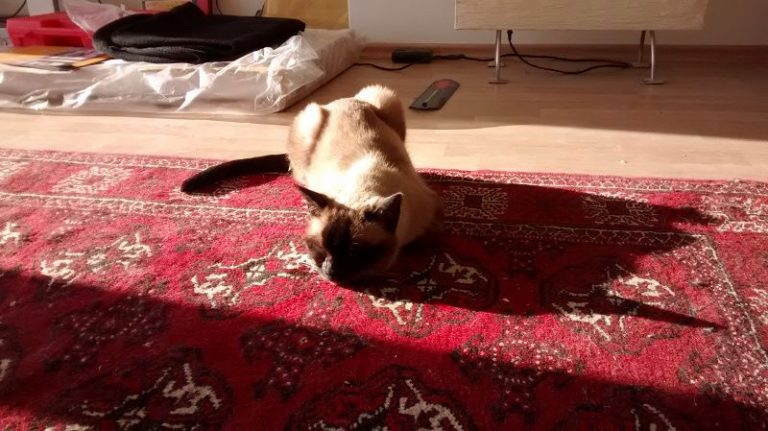 When all the unboxing and assembling of furniture started however, she was too nosy not to participate in all the excitement around her. She rarely sat in boxes (very unusual for cats, it seems), but she loved to inspect everything new, and always performed a thorough quality check by rubbing her face against the item in question.

One of her favourite new sleeping places was the big black sofa. We prepared a soft blanket that matched her colour, but of course she preferred to shed hair on the dark spots! 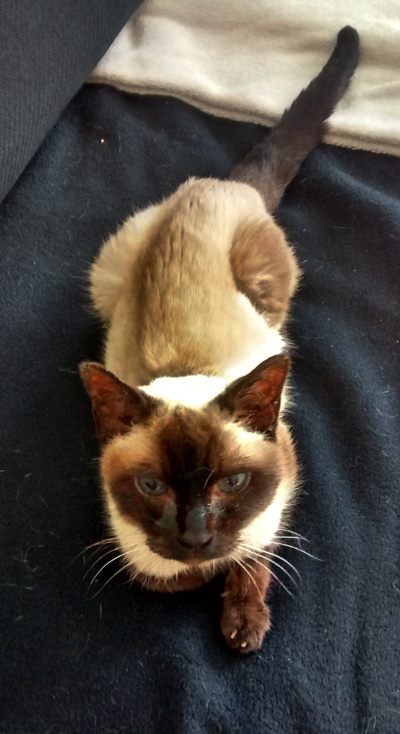 She soon found out that a balcony is a nice place for sunbathing and extended her realm a bit.

She declared her own water bowl to be boring and preferred to drink from our tea cups, the Christmas tree saucer, or the toilet… 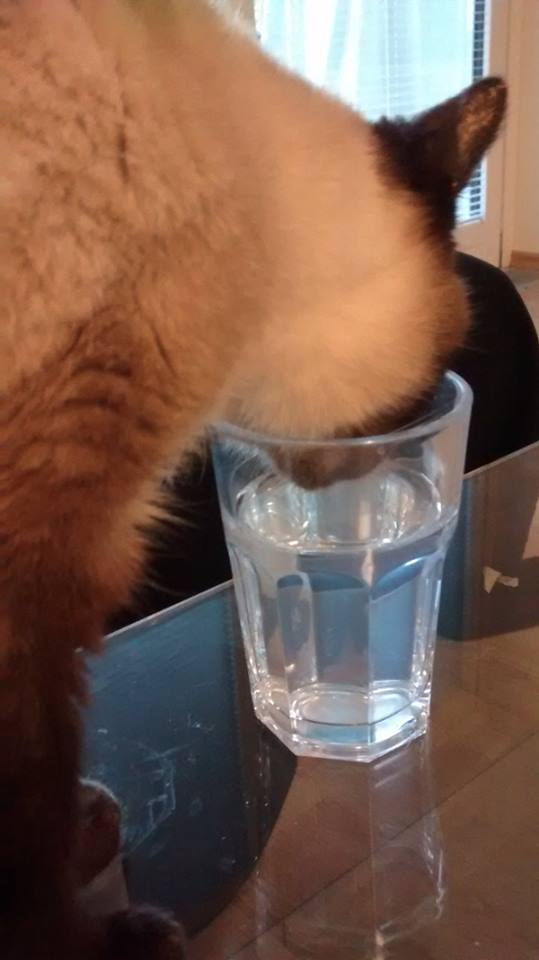 Over time she became less agile and stopped using the stairs or jumping on higher objects, but other habits did not change – she always loved having her face and chin brushed, and would push her head into the brush with such motivation that her front paws lifted off the ground.

She also continued sunbathing in summer:

Her previous owner had gotten her used to travelling, so when we started her on regular infusions to improve her health, she would patiently sit inside her travel box and be carried over to the vets’ office, a 5-minute walk followed by a 3-minute treatment. When we returned home afterwards, she would be especially hungry and demand dinner immediately.

Her disgust of chilly weather became more pronounced over time; resulting in violent paw twitching when she was confronted with cold air streaming in from the balcony door.

She had to have dental surgery at age 19. We feared the worst, but she recovered and we were very relieved to see her enjoy eating again. 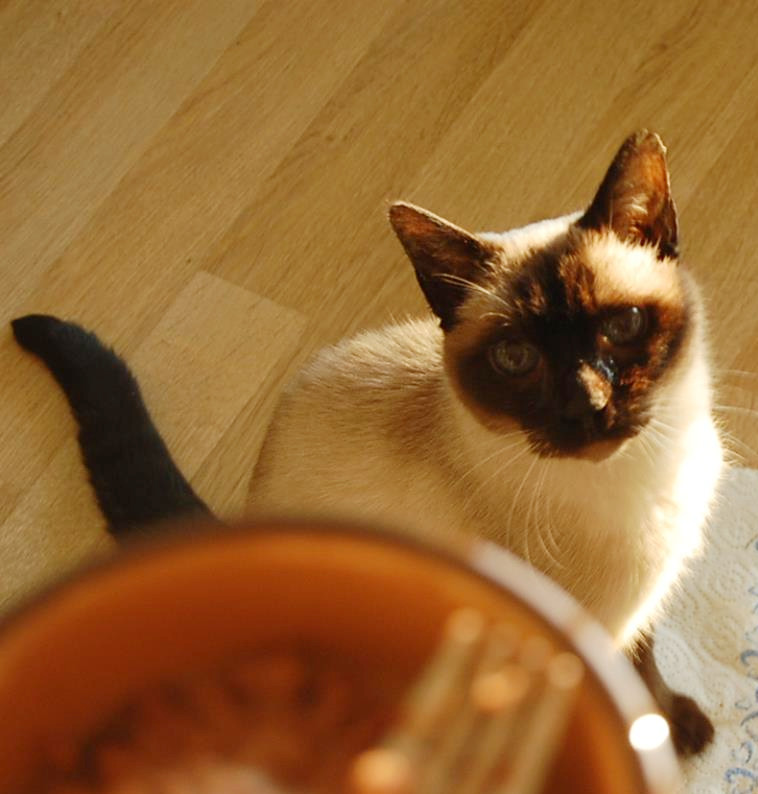 She was so skilled that it took us a long time to find out she had gone almost blind around age 21. It did never keep her from wandering around though, and even checking in on people whenever we had guests: she would make her rounds, enjoy being petted, and when she felt satisfied with the attention she would retire to another room to have a nap. 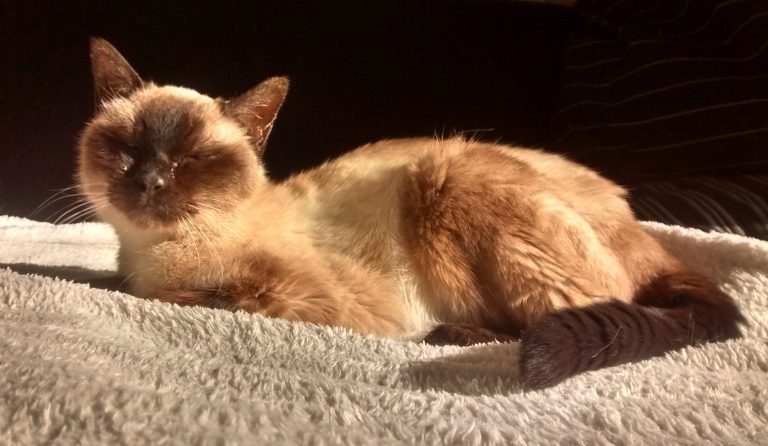 During those occasions, people regularly mistook her for a young kitten due to her minuscule size.

Our home is less homely now that she’s gone. She embodied quiet contentment, trust and harmony, and we will not forget her. 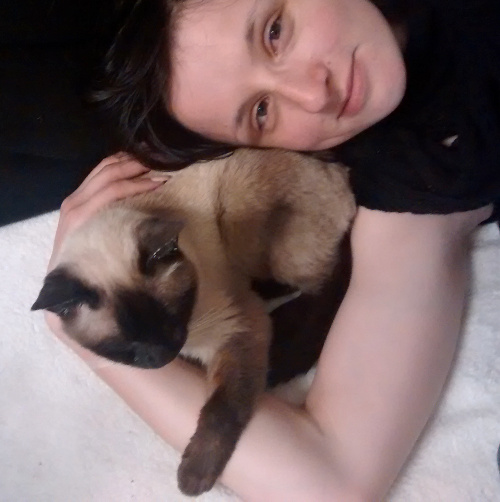